The Ruprechtov site is located in the north-western part of the Czech Republic and represents a secondary uranium enrichment in a Tertiary sedimentary basin. The Ruprechtov project was initiated in 1995 and carried out as a close cooperation between the Czech nuclear research institute ÚJV Řež and the German research organisation GRS. At that time, the preferred options for the disposal of heat-generating radioactive waste were repositories in a salt dome in Germany and in granitic rock in the Czech Republic.

Overlying sandy and argillaceous sediments, as they occur in the Ruprechtov area, were - in both options - regarded as one important natural barrier for radionuclide migration. In particular, sedimentary organic carbon (SOC) and high concentrations of dissolved organic carbon (DOC) were partially observed in the overburden of salt domes in Northern Germany. Therefore, it was one major aim of the project to increase the knowledge of processes connected with the behaviour and transformation of organic matter in natural systems.

This comprises the interrelation between SOC and DOC, potential mobilization processes of SOC and their impact on radionuclide mobility. Furthermore, microbes might be involved in the organic matter degradation processes and the uptake of radionuclides, but at the same time also in determining / changing geochemical conditions such as pH, redox or mineral phases and formation of biofilms, as demonstrated e. g. in (Meleshyn, 2011). The investigation of such processes in a natural system was expected to provide knowledge about whether these processes occur, the extent of their occurrence and interrelation or coupling between the different processes.

The decision to use the Ruprechtov site as a research site was taken because (i) the sediments there represent characteristics of the overburden of potential host rocks, (ii) organic rich material, sand and clay (e.g. bentonite) as well as uranium enrichment are known from the site, (iii) basic geological information on the uranium accumulation was available, and (iv) the interesting layers with uranium mineralization are within app. 40 m depth (for practical purposes, no mining work required).

The site is geologically situated in a Tertiary basin, which forms part of the Ohre rift (Noseck and Brasser, 2006). The study area itself is characterised by granitic rock, which partly crops out in the west and in the south, but is covered by kaolin layers (due to weathering of granite) of varying thickness up to several tens of metres in the central part. Large parts of the basin are additionally overlain by pyroclastic Tertiary sediments. A multi-method study of these, now argillized sediments – in combination with lignitic intercalations and close-by uranium enrichments – permitted to gain a better understanding of the complex interrelations between transport and retention of radionuclides in argillaceous media with considerable amounts of organic matter under natural conditions. Thereby, very long-term scales, as relevant for performance assessment, could be considered, too.

The today’s interface between kaolinised granite and the overlain pyroclastic sediments represents the earth surface in the region during Tertiary time. Its strong morphology, i.e. former elevations and depressions, is still preserved underground, with variations in altitude of more than 60 m. The main scientific interest is a clay/lignite layer at this interface close to depression positions, characterized by high content of sedimentary organic carbon (SOC), zones of uranium enrichment, and local zones of higher hydraulic conductivity (Noseck and Brasser, 2006). The presence of pyrite and siderite reflects reducing conditions in this particular layer, containing up to 400 ppm U. A schematic cross section of the local Geology is shown in Fig. 1. 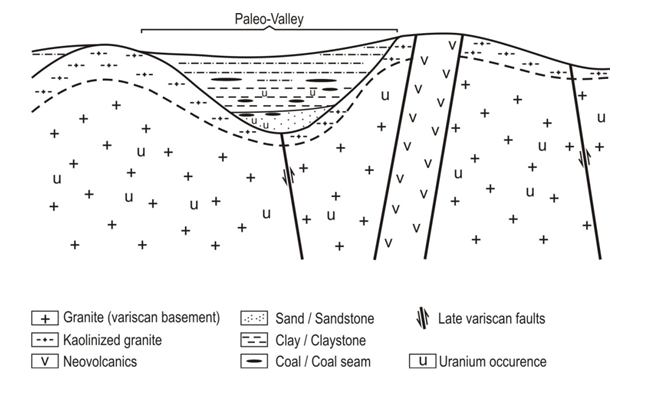 Fig. 1. : Schematic cross-section showing the main geological features of the Ruprechtov area including the occurrence of uranium in granite (broadly disseminated) and in Tertiary sediments (locally accumulated in layers) (Brasser et al., 2014)

In the course of the detailed site investigation program at Ruprechtov, situation turned out to be rather complex with regard to its hydrogeology and geological evolution. Therefore, the possibility to use the site as an analogue for the overburden of a geological Repository had to be restricted in several aspects. Nevertheless, a quite large number of results, relevant for a safety case were achieved.

The integration of all results showed in general that organic matter did not play such an important role through direct interaction with uranium as expected. According to the results from the Sedimentary Organic Carbon (SOC) characterization, it seems that the low concentration of dissolved organic matter (below 5 mg/L) in the Ruprechtov system has mainly been caused by the low availability of organic matter to the processes of degradation. Only a very small fraction of the SOC is accessible to the groundwater. An additional reason is the strong sorption property of the clay, which fixes humic acids to the sediment matrix and therewith further reduces the mobile concentration. In addition, sorption experiments with U(IV) in the presence of humic acids on material from clay lignite horizon, demonstrate well that HA concentrations below 5 mg/L do not impact sorption values of uranium and therewith do not contribute to the mobilization of uranium (Červinka et al., 2011).

However, sedimentary organic carbon (SOC) has contributed and still contributes to maintaining reducing conditions in the clay/lignite layers. This is supported by the finding that the highest accumulations of uranium are located slightly below the zones, which are highly enriched in organic matter. It can be concluded that SOC within the sedimentary layers was (and to some extent still is) microbially degraded by sulphate reduction. Evidence for the reduction of sulphates to sulphides was shown in batch experiments with indigenous microbes and sediments extracted from drill cores (Noseck and Brasser, 2006). It was demonstrated by the increase of 34S values in dissolved sulphates from the infiltration area compared to the clay lignite layers that this process is still active at the site (Noseck et al., 2009). And further evidence for the process in the geological past is still traceable by the typical framboidal shape of the pyrites found in the clay/lignite layer (see Fig. 2).

These pyrites are at least to some extent involved in the immobilization process of uranium. Reducing conditions, being maintained amongst others by the sulphate-reducing bacteria, caused the reduction of As, which sorbed onto pyrite surfaces, forming thin layers of arsenopyrite. U(VI) was originally released from the outcropping/underlying granite and reduced to U(IV) on the arsenopyrite surfaces (Denecke et al., 2005 and 2007). UO2 and uranium phosphates were formed by the reaction of U(IV) with phosphates PO43-, released by microbial SOC degradation. Occurrence of uraninite and ningyoite was shown by SEM/EDX analysis (Fig. 3, right).

The Ruprechtov natural analogue provides evidence that uranium is and has been effectively immobilized in a sedimentary layer of a formation, which has been exposed to surface erosion in the geological past. Most of the uranium was determined to occur in a very long-term stable, tetravalent phase. Results from chemical U(IV)/U(VI) separation methods are in good agreement with the results from spectroscopic µ-EXAFS/XANES and SEM (Noseck et al., 2008). All of the results indicate that uranium was efficiently immobilized in a reducing environment (controlled by the SO42-/S2- couple) over millions of years and no significant release of immobilized uranium occurred within that time, although the uranium-bearing horizon is in direct vicinity of groundwater-bearing layers.

Due to the analogy between argillized tuffs and a bentonite buffer, the strong buffering and long-term stability of the uranium enrichment can also be transferred to the demonstration of the safety function of bentonite buffer as an engineered barrier. Moreover, this barrier function of clay sediments was preserved even at a few meters distance from the operating kaolin mine. Because of the low permeability of the clay, the reducing conditions and therewith the stability / immobility of uranium have been maintained.

Several analytical methods for the characterization of dissolved and solid phase uranium have been applied and further developed including uranium series disequilibrium measurements and U(IV)/U(VI) separation using 234U/238U isotope analysis. Innovative microscopic methods have been used in combination with macroscopic methods contributing to the identification of key processes at the Ruprechtov site. These new methods are particularly important for yielding information about the (hydro)geological past of a potential repository site, which is important in increasing confidence in the predictions of the site’s future evolution. This in turn is one prerequisite for building a safety case. A recent comprehensive summary of methods used and results of the Ruprechtov study is available (Brasser et al., 2014).

The work of GRS and, to some extent, supporting institutions was funded by the German Federal Ministry for Economic Affairs and Energy (BMWi), mainly under contract no’s 02 E 8926, 02 E 9128, 02 E 9551, and 02 E 9995. The work of ÚJV Řež, a. s. was financially supported mainly by the Czech Správa Úložišť Radioaktivních Odpadů (SÚRAO) and by the Ministry of Industry and Trade of the Czech Republic (TIP FR-TI1/362). Parts of the project were conducted under the 6th framework programme of the European Union (project FUNMIG, contract No. FP6-516514). 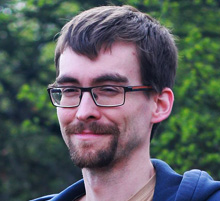 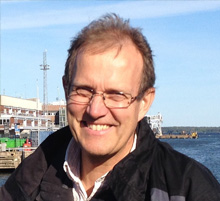 The following files are from our online library: