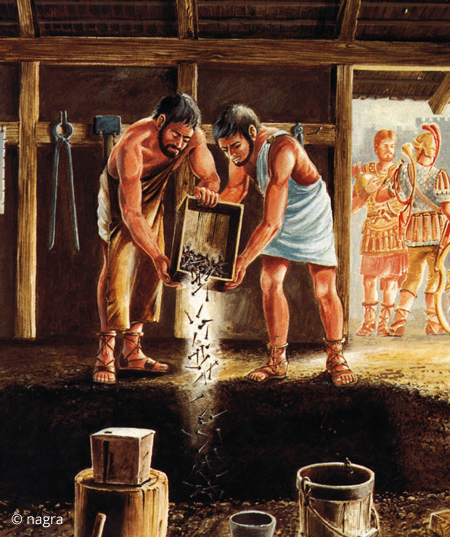 Iron and steel may be used as canister materials in a deep geological repository for radioactive waste for the containment of high-level waste (HLW), spent fuel and low- and intermediate-level wastes (L/ILW). The archaeological excavation of a distant outpost of the Roman Empire, an archaeological analogue, has given us an insight into the stability of iron over a time period of thousands of years.

One of the multiple layers of the protective barriers intended to prevent early exposure and mobilisation of radionuclides from HLW and L/ILW repositories is a metal canister to contain various radioactive waste types, including spent nuclear fuels. The metal of these canisters must be resistant to:

Resistance must be long enough for shorter-lived radioactive fission products to have largely decayed. Metals based on iron and copper are the main candidates for canister construction because both appear to have many of the required properties. Metals are also likely to be used in many of the construction components of any repository for radioactive waste.

The use of iron and steel

Metals based on iron form an integral part of some proposed repository systems, particularly in the construction of canisters. In some concepts these canisters will be enclosed within an additional canister of a different metal, such as copper. In other cases, the canisters may be sealed by and enclosed in compacted clay (bentonite)  backfill or encased in a cement.  These sealing and backfill materials will slowly become saturated by water from the adjacent rocks after closure of the repository.

Natural and archaeological analogue and experimental studies have been used to understand the process and rate of corrosion of iron under the warm, mildly alkaline and reducing chemical environment that will persist in a repository.

Inchtuthil as a natural analogue study

An apparently unremarkable area of pasture situated on the banks of the River Tay near Dunkeld in Perthshire, Scotland, marks the site of the most northerly legionary fortress in the Roman Empire. It was briefly occupied from A.D. 83 to 86 and then abandoned in an orderly manner. The only visible evidence at the site today is a relatively well preserved ditch that formed part of the Fort’s defensive perimeter. 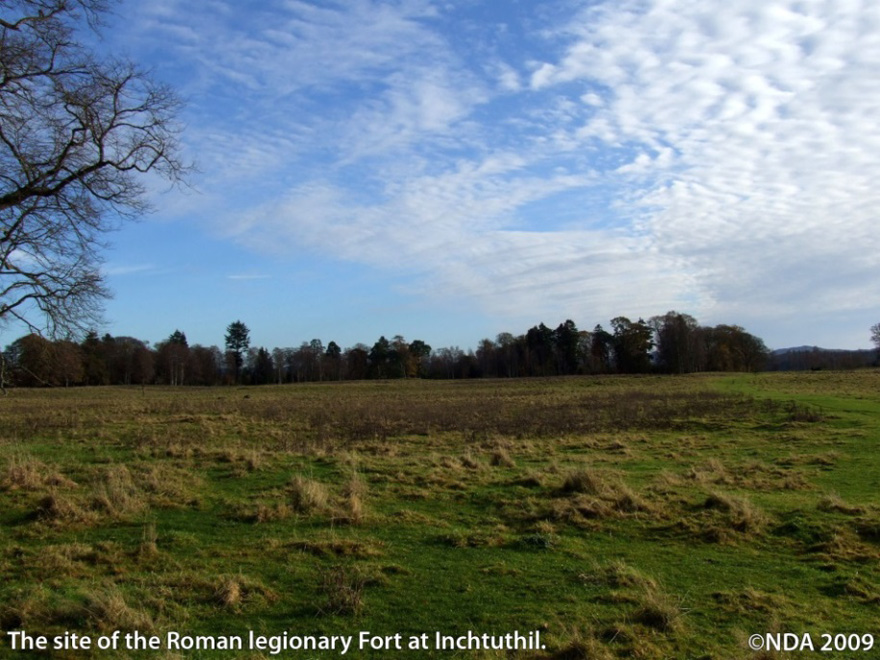 During the 1960 season of excavations at the site (active 1952-65), a remarkable hoard of around one million iron nails was uncovered within the grounds of the fabrica (the Fort’s workshop). Some nails came out of the ground in a near-pristine state. During the abandonment of the fort, in a (successful) attempt to put the nails out of the reach of the local tribes, the nails had been buried in a 3.66 m deep pit dug into fluvio-glacial deposits and covered by a 1.83 m depth of gravel.

When the hoard was first uncovered the outer layer of nails was described as having corroded to an impermeable crust, particularly those at the top. Inside the crust many nails only had a thin patina of corrosion product (scale) whilst some at the core were virtually untouched by rust.  Some clusters of nails were reported to have developed a pitted style of corrosion.  The nails themselves comprise low-carbon steel and appear to have been made with sophisticated metalworking skills.

The internal structure of the nails is finely layered, with the layering a result of variations in carbon content and the presence of thin non-metallic inclusions containing silicate (fayalite) saturated in iron oxide (wustite). It is thought that the layered structure is because the smiths formed the nails through ‘friction welding’ of many thin  layers (e.g. by folding of thin sheets).  The non-metallic inclusions are the remnants of low-melting point slag deliberately applied to assist in this process. The nails have different shapes, sizes and  hardness’ depending on their intended uses. The degree of corrosion does not systematically reflect differences in composition.

The reaction of the outer nails with water in the ground has contributed to the preservation of the central nails in two ways:

A further degree of protection of the central nails was also provided by the presence of the thin coating of scale on some surfaces of the nails themselves; surfaces coated by this scale were noted to be less corroded than surfaces without coatings.

Relevance - what we have learnt

NAWG would like to thank RWM Ltd (UK) for their kind permission to use this excerpt from their publication ‘A Catalogue of Natural Analogues for Radioactive Waste Management.’ (BGS Commissioned Report CR/15/106, BGS, Keyworth, UK) by A.E. Milodowski, W.R. Alexander, J.M. West, R.P Shaw, F.M. McEvoy, J.M. Scheidegger and L.P. Field (2015). This report can be freely downloaded at https://rwm.nda.gov.uk/publication/a-catalogue-of-analogues-for-radioactive-waste-management/